“I went out full and the LORD hath brought me home again empty: why then call ye me Naomi…” (Ruth 1:21)

In this article I wish to talk on what is the right response to the perversions we see in the church. It is very easy to conclude that we ought to leave the church as many people have been calling for well meaning Christians to leave the church. But to such people my only word of caution is, “remember Naomi.”

There was famine in the land of Israel as there is famine of the word of God in today’s church. Going with her husband and two sons, she left the land of Israel for the sake of famine as people today are being pressed to leave the church for the sake of famine of God’s word. They thought it was the wisest thing to do just the way the people today think its the wisest thing to do. She went out full but came back empty. She went out in hope and came back with regrets. We have to be careful lest we come back empty in the later end with a lot of regrets.

Note her words, “…the LORD hath brought me home…” (Ruth 1:21). Home implies where she belongs. If you’re born again, you belong to the church. The heretics you’re leaving the church for don’t belong there. History has taught us that this kind of actions are always a mistake. To leave your post to maintain peace because of a threat to peace would never maintain that peace. That David left the throne for Absalom didn’t make him not to seek his life. The throne was his but he left it to Absalom whose the throne was not. Emperor Mauritius, the pious emperor of Byzantine, for the sake of peace left the throne for his rogue General and retired to his private monastery, but his General went after him, captured him, and beheaded his children while he watched, and thereafter killed him and threw their bodies into the sea. The throne was his but he left it to his General whose the throne was not. You too must not leave the church for heretics whose the church is not. Leaving your post is never a way to seek for peace.

Also, to leave the church is to leave the field for the Devil. Wherever place you hope to find peace and green pasture, he’d bring the war there too. You can trust the Devil for that. Why not engage him in the field? Why not seek to take the field from him. Why not brandish the sword of the spirit and engage him right there?

The peace people are looking for in acting this way does not exist under the sun. Only in heaven can we have such peace. To take our mind from such delusions, the Bible clearly states, “there must be also heresies among you…” (1 Corinthians 11:19). It is a must. Not long after some left the church because of heresies, extortion, and wickedness, the Devil has sent heresies after them. Heresies such as “Christianity is not a religion,” questioning the gender of God, whether or not hell and heaven is real, etc. So where’s the peace. The Christian battle is not to be won by retreats but by head-on offensives. So let’s be clear on that. 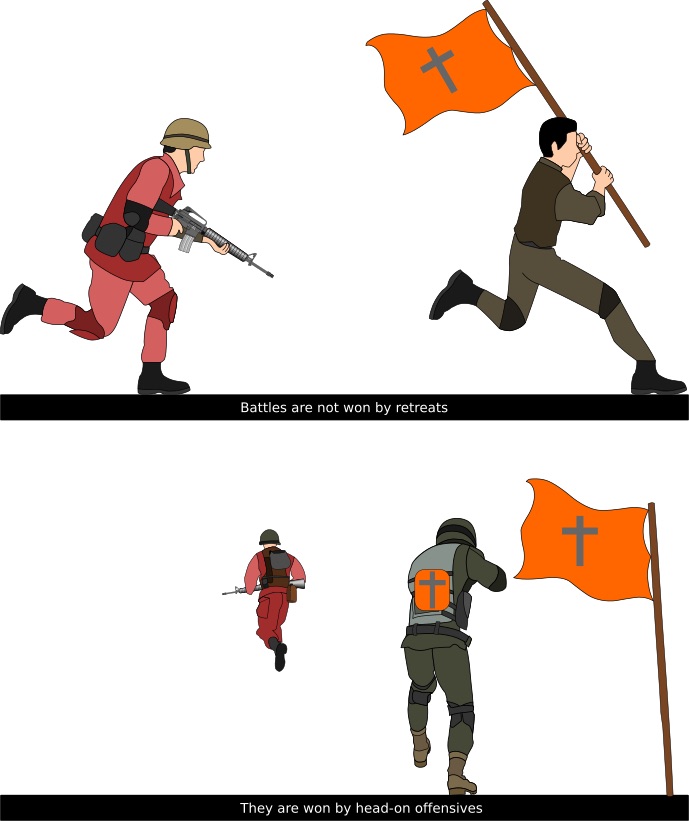 It is natural to want to separate yourself from an assembly that does not preach the true gospel or that use the gospel as a means for extortion. I too contemplated leaving the church for a long period of time and one day I concluded it was the right course of action to take. I decided to stay home and spend those hours praying, singing, and writing. However as I was at home and wished to start my prayer with a song, the first song that came to my spirit was a Yoruba song. The translation in English goes thus:

A shepherd of the sheep is our Saviour,
Our Father is at his post, what shall we fear,
Just let us go to where he leads us,
Whether it be to the arid land or to green pastures.

I meditated on this song a while. I wondered what message was in it for me at that present time. Then as I pondered on it, I began to receive the revelation that the church is the arid land. There’s no food for the soul there it seems, but just let us go there, whether it is an arid land or a green pasture. Realising this I dressed up and went to church. When I got there, it was service as usual. Music and message that you know can’t profit you a dime. But the Sunday after that a man who was not a pastor of that church was sent to preach. I know him very well and I didn’t like his messages at all. And when he was introduced I had very little expectation of the message. But when he began to preach, very surprisingly and very contrary to my expectation, his message sparked such a great revival in me. He spoke about Moses, how he named his son Gershom (meaning sojourner), so as to keep himself in constant reminder that he was a stranger both in Egypt and in Moab. He took us through scriptures and delivered such a powerful message to us never to forget that we are strangers in this world, and that to keep this in our mind is something we must labour to do as we are so prone to forget these things. He chided the worldly lifestyle in the church, not exempting himself, and made an altar call for everybody to come and pray for mercy to be ready when the Lord shall come to take us home. I was so blessed by the message and went home spiritually refreshed and fired up.

Now this was one of the men who preached the gospel of mammon. I have not heard him in particular preaching so much about money but I didn’t like his messages all the same, and he was one of the guys running a sick church. Yet through him such a powerful message of revival came to my soul in a way I am pretty sure may have not if I stayed at home.

If God has abandoned his church a while, don’t think he can’t come back to breath his life into the dry bones he left behind. Just as God revisited Israel as in the days of Naomi, he can by his own sovereign will and power choose to return with a sweeping revival. He could turn the hearts of these extortioners all the way back to himself in true and deep repentance. Why should you be left out when God returns to his church?

So let us not leave the church. Not leaving the church does not mean that you accept the things that are being done there or that you’re a part of these things. But be there as a voice of righteousness and resist the powers there. In your respective churches stand for the truth and push for a total unity in purity of the whole church. Don’t stop at anything short of that.

I am confident that Christ is resolved on destroying this church and raise a new rapturable church of noble soldiers as I explained in my article “THE REVELATION OF JESUS CHRIST TO A BROTHER,” and we can and ought to be his instrument to fulfilling that righteous purpose, but it can be done without leaving the church. It has to be done by challenging heresy head on. I expect to see better communication and questioning of false doctrine, and defending of the truth, either by letters, email messages, or by any means we see possible. Let us not fall for the deception of carving out one corner for our selves for a peaceful and united fellowship. We must keep the battle raging in the field for the truth of our Lord and God, and not hide out in the bush somewhere singing hymns and clapping hands. Don’t say “they are deceivers deceiving the deceived, leave them alone.” Rather stand there with the sword of the spirit of God and drive them out.

When the Bible says, “And I heard another voice from heaven, saying, Come out of her, my people, that ye be not partakers of her sins, and that ye receive not of her plagues.” (Revelation 18:4). This means we should strive to bring the church out of those sinful ways and not leave the church behind trying to come out of those sinful ways. Getting rid of the sinful ways is what’s important not leaving an assembly. We have not left the ways of Babylon if just a hand full of people leave a church. It is when the sin of Babylon cease in the church that we, his people, have “come out of her.” This therefore should be our goal.

So let us remain in the church and keep praying for her and doing all we can to have her come out of those sinful ways and be united in every way. If we have the courage, let us challenge even those in authority for their evil practices to their very faces. Let us hold the fort in midst of plenty or famine.

Naomi went out full, not just with possessions, family and all, she went full of hope, but she came back empty of everything including every hope. The actions of her family cost them much as they could not maintain a direct lineage to David. The great grand father of David could have been her son, but Boaz came in in his stead. Though Boaz raised seed for her son through Ruth, her family was not mentioned as part of the ancestors of David in any genealogical account of scriptures. They went through Boaz’ lineage instead. You may have a wonderful role to play in God’s story. Why should another step into your place? Let us therefore be warned and not make such mistakes but remain steadfast for the truth without leaving our post.

May God help us and grant us help and guidance in Jesus’ name. Amen.

Prayer: Dearest Lord Jesus, I pray to you today asking for your help and guidance in knowing the best response to evil that has crept into your church in the sad times. Give us grace to be courageous, bold, and unrelenting in our contention for the faith. Help is dear Lord. This I ask in your matchless name. Amen.