WHAT YOU NEED TO KNOW ABOUT RAPTURE

“In a moment, in the twinkling of an eye, at the last trump: for the trumpet shall sound, and the dead shall be raised incorruptible, and we shall be changed.” (1 Corinthians 15:52)

Some so ridiculously say in defence of this stance on rapture, “God will never allow his children to suffer in the great tribulations.” Just hear that word, “Never.” I laugh at such confidence. Where was God through out history when his children were being brutally killed? Where was he when during all the reign of Queen Marry of England, Christians were being burnt at the stakes on daily basis. Where was he when his faithful servants were betrayed, and killed in the most painful and shameful ways? Where was he at all these times? Or shall we say these people were not Christians that is why they suffered and died? Of course they were more Christians than we around in this age of apostasy. If these suffered gruesomely, have we become some kind of celestial pets that God would NEVER allow his children to go through the tribulations? Are we going to attribute wickedness to God for allowing this? For seeing we call it love that he will NEVER allow his children to go through these things, it must be hate if he allows us to go through them. But God is not wicked. In his love, he said it plainly, “Yea, and all that will live godly in Christ Jesus shall suffer persecution.” (2 Timothy 3:12). For any that wishes to have this view that God will NEVER allow his children to suffer tribulation, I recommend that such an one should read the book “Fox’s Book of Martyrs.”

Reading the Bible’s revelations and prophecies, I find it quite self explanatory. In the book of Daniel, you’d find quite clear interpretations of the revelations that he had. The revelations of Christ about the end times too are quite clear, and the book of Revelations too is clear to a good extent. What makes understanding these portions of scriptures somewhat hard is the interpretations given it by some Christian writers. Had they left the child of God to himself, he probably wouldn’t have a problem understanding them.

We all probably have read the famous apocalyptic novel, “Left Behind,” but I love the way a writer puts it when he said, “Left Behind was not put in the category of Christian fiction without reason.” I wish these fables and fictions about rapture would be disregarded by every child of God. We must arrive at a conclusion based on scriptural facts.

These misunderstandings about rapture is a major contributor to the sleepiness of the Christian church. The church is way too unready for the challenges ahead because of this lie. For this reason, I hope to present to us the truth about rapture in this article. 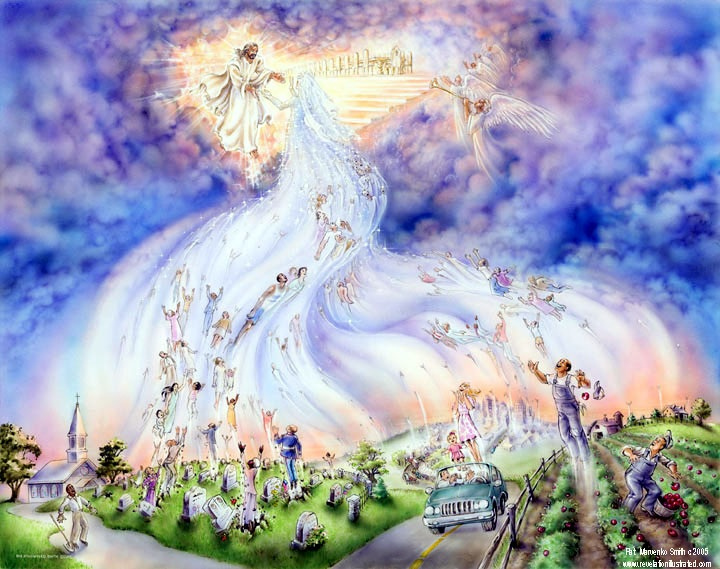 Rapture would definitely take place. It is completely scriptural and to say it won’t happen is to deny a part of the Christian faith, and to deny in part is to deny in whole. But the thing that is wrong with the interpretations of rapture is the position it is placed in the sequence of things that should bring about the end. That misplacement is highly dangerous and has a catastrophic effect on the church.

Jesus, speaking about the end time events, narrated all the terrible things that should come upon the earth which very evidently includes the great tribulations. But after he narrated all these things, he went on to say concerning the event we understand as rapture, “Immediately after the tribulation of those days shall the sun be darkened, and the moon shall not give her light, and the stars shall fall from heaven, and the powers of the heavens shall be shaken: And then shall appear the sign of the Son of man in heaven: and then shall all the tribes of the earth mourn, and they shall see the Son of man coming in the clouds of heaven with power and great glory. And he shall send his angels with a great sound of a trumpet, and they shall gather together his elect from the four winds, from one end of heaven to the other.” (Matthew 24:29 – 31). So note that he tells us that after the great tribulations comes the signs of the Son of man, then his appearing, then the rapture. So Jesus tells us rapture is not before the tribulation but after. Rapture marks the conclusion of the things that shall take place on earth.

To show that all the scripture is in agreement with this, the key text for this article goes, “In a moment, in the twinkling of an eye, at the last trump: for the trumpet shall sound, and the dead shall be raised incorruptible, and we shall be changed.” (1 Corinthians 15:52). That prophecy speaks of rapture. It says at the last trump. But we see that there are seven trumps sounded by angels in the book of Revelations during the great tribulations. But this last one which shall be after all the events of the tribulation is the one that shall sound before rapture shall occur.

Read for yourself what the Bible says will occur when the seventh trumpet is sounded in Revelations 11:15-19. Note that the twenty four elders said in verse 18, “…thy wrath is come, and the time of the dead, that they should be judged, and that thou shouldest give reward unto thy servants the prophets, and to the saints, and them that fear thy name, small and great; and shouldest destroy them which destroy the earth.” The seventh trumpet brought about the time of the judgment. The previous trumpets were for torment of the inhabitants of the earth during the great tribulation, but the seventh trumpet would bring about the wrath of God and the time of judgment. This is the last trumpet that apostle Paul spoke of that at its sound we shall be changed in the twinkling of an eye. This is the rapture.

If you proceed to chapter 12 you may think that it is narrating things that shall occur after the seventh trumpet, but it isn’t. This is another revelation entirely. It is not the continuation of the preceding ones.

What does this mean? What does it mean if the rapture is not happening before the great tribulation? It means, there is a war to fight and there is a victory to win. It means you’re going to war against a monster as brutal as the very beast. It means, if you prepare yourself now, that you would be accounted worthy to be one of those who shall defeat such a beast. So, don’t just sit there and wait for rapture as an escape from the tribulation. Begin to prepare yourself by means of prayer and intercession, fasting, consistent study of the word of God, meditation, and service to God. Keep asking like Paul asked Christ on the day of his conversion saying, “what wilt thou have me do Lord.”

The good soldier who has been faithful to his training and being well trained delights to hear of the approach of the enemy while the lazy bad soldier gets unhappy at his approach. The one for the joy of the victory and glory ahead says, “come on, bring on the battle,” but the other bad soldier says, “go away with the battle, with the glory, with the victory, just give me my coffee.”

It is time to prepare. It is time, as a good Christian soldier, to cast sloth away. It is time to begin planning and preparing for the end time. It is time to polish your rifle, load your backpack with spiritual ammunitions, get your maps and compass, put on your boots, and singing the victor’s song take your position in the ranks of God’s end time army with joyous expectation of the victory and glory ahead. Wake up. O wake up child of God.

May God help us all. Amen. Let’s pray this prayer:

Dear Father, we see through your word that your plan have made plain to our believing eyes. We see clearly that we have been too cold for what this evil times require. Lord help us to cast sloth away. Help us to wake up to true spiritual reality in you. Help us to prepare for these evil times ahead. Guide us aright o God of host. In the end, as your revelations also assures us, grant us victory over this evil beast in Jesus’ dearest name we pray. Amen.